North from Lilongwe, into the wild Nyika Plateau.

I knew my provisional itinerary involved taking the road less travelled from time to time. But remote takes on a whole new meaning in Malawi. We (Everlasting and I) left Lilongwe on the M1 - a single track road carrying just us and a bicycle or two. After four hours we turned onto a dirt road into the Viphya Forest Reserve - to drive for another 15Km to reach the Lodge.

This reserve began as a pine forest: the land was given by the government to a company who promised to build paper mills. When the first trees had matured, the company asked for more land. The government refused. Pine is not indigenous to Africa, and they did not agree with further encroachment on the natural forest. There was a stand-off; the government refused to back down and the company walked away leaving acres and acres of land covered in pine. In addition, bush fires and illegal logging have damaged the forest even further.

The Luwawa Environmental Trust is now growing thousands of indigenous trees from seed and beginning to replant the forest. And so my three days in their Lodge, deep in what is left of the natural forest, has contributed to a tree or two.

From there, we headed further north, to the Nyika Plateau. I knew, from my guidebook, that it could be a challenging journey. I'll leave you to imagine 140Km on dirt tracks in the rainy season. Well, most of it was dirt tracks. Sometimes the track had been washed away and we bounced hopefully or swished through muddy water until we found ground the tyres could cling to.

But it was worth the drive. The Nyika plateau, in the wet season, is lush and green. It's mostly sandstone, with granite outcrops. Trees cluster in the valleys. Kites and buzzards soar overhead. Tiny larks and pipits nest in the grasses. Herds of zebra, eland and roan antelope gather on the hillsides. Snakes slither across paths and up trees: grass snakes, pythons and spitting cobra. And, prowling among the trees and creeping through the grasses, the leopards stalk the unwary. One roared outside my chalet door the night before I left (I didn't open the door to take a picture!).

And it is a million miles, or so it feels, from a reliable internet connection. So I've had to wait until I've reached the northern lakeshore to post this. But here, is a glimpse of the coffee time on the Nyika Plateau, with the table set (complete with cloth) on the grass next to the truck, and behind it the rolling uplands of Malawi. 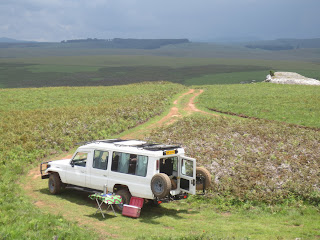