Home-moving takes over the world.

And other peoples' moves really aren't that interesting. There's nothing original to say about packing and unpacking and forgetting the kettle (or the wine).

And so I'm shutting the blog-shop for a couple of weeks till it's all over. Hopefully I'll have my brain back by then.
Posted by JO at 18:30 2 comments:

On having the concentration span of a gnat.

Stress comes in many shapes and sizes. Right now mine is in the shape of a house. People move house all the time. There's nothing original about mine, but it is taking over my world at the moment.

But it has, for me, highlighted the side-effect of this level of stress - having a concentration span reduced to that of a gnat. I do have a rudimentary understand of the neuroscience: I know that all the thinking bits of my brain are firing at the same time and finding it confusing trying to talk to each other. But does that help me live with it? Does it, hell!

I know I could be more constructive if only I could complete one task before beginning another.  But there I am sorting out a cupboard, when I remember I need to give my new address on my travel insurance people. So off I go to find the list (which list? I now have several, some of which - like my brain - fail to talk to each other). While I'm there I notice I still haven't found anyone who might like my garden tools. So I settle with the phone … and when it's bedtime I wonder - why there is stuff all over the bedroom floor?

Then - I manage to sit down for five minutes. This, I tell myself, is the moment I shall arrange the transfer of my Internet. I phone the provider … I am in a queue. I'll try tomorrow. Tomorrow comes. I try again, and this time wait in the queue … and wait … and then, oh joy, I am speaking to a person and I've come through to technical support and not home-moving … but I'm transferred … why didn't I make myself a coffee before I began this? Fortified, I might have stood a chance of concentrating in through a process that somehow took over half an hour.

But at least it's one thing I can tick off the list. If only I could find the right list …

On laughing through the bad times

There’s no escaping the news at the moment. A buffoon is in the White House (a man who thinks climate change is just ‘weather’ has his finger on the nuclear button). Here in the UK the referendum has exposed deep divisions which are exploited by extremists on both sides. Years of austerity have left those who look out for us impoverished and demoralised; the horror of Grenfell Tower is a testament to the powerless of the poor.

It is enough to make anyone wants to retreat into a corner and chew their own arms off. How can we feel anything but useless when those who are meant to take decisions on our behalf continue to disregard the needs and feelings of the disadvantaged? In the U.K. David Cameron’s suggestion that those who wanted nurses and firemen and women paid reasonably were ‘selfish’ (when he is paid however many thousands for one after-dinner speech) seems to sum up how little politicians care about those who elected them.

Most of us are totally powerless to change anything - other than being kind to those around us. And we must never underestimate kindness. It is, surely, evidence of our continued humanity in spite of everything. Small kindnesses can make a huge difference.

But I think we need more than that - we need fun. How, you might ask, can we be frivolous when we are surrounded by misery and uncertainty? Isn't it somehow insulting to those in abject need if we take time out from breast-beating to have a good party? Doesn't spending time in unnecessary jollity imply a lack of concern for the general political and social mayhem?

But I think it's essential to take time out occasionally. Laughter is, in itself, restorative. Good food, especially eaten with those we love, nourishes far more than our stomachs. Even a dance round the kitchen is oddly energising.

It's probably not possible to manage a precise balance between frivolity and general angst. While it might be tempting to ignore the dreadfulness and live hedonistically, such a view is an abdication of any responsibility to hold our politicians to account. But spending every minute fighting injustice, in the light of apparent indifference from those in power, must be hugely demoralising.

Somewhere there must be a balance - and maybe that changes from day to day. But I think it's worth striving for, even if we get it wrong most of the time.
Posted by JO at 18:30 3 comments:

Well, 'tis done. It's been hard to find the headspace to disentangle my Malawian exploits and reorganise them into a coherent narrative. Only time will tell if I've managed it. 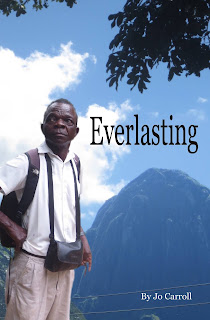 On top of the writing challenge - and without going into too much ‘poor me’ detail - I'm moving.
People move all the time. They get stressed and they get over it. Well, that's the plan. But it's been the unfortunate context in which I've tried to unscramble my Malawian diaries.

But this book felt important - more than some of the others. This is much more than ‘woman has a great time in Malawi.’ It was a trip that challenged me physically - for the first time I wondered if I really need to spend hours bouncing around in a truck while being driven up a dirt track in the rainy season. I also had an interesting encounter with termites (well, interesting in retrospect. At the time I was busy picking them out of my ears, and my nose, and from by shirt-front …)

However, the real challenge of this trip lay in its questioning all my ethical assumptions about the role of aid agencies in tackling apparently intractable poverty. From the day I arrived I met people with strong opinions - everyone had ideas, but no one had solutions. What I found most upsetting was nobody seemed to see the purpose of a career in overseas aid as working themselves out of a job.

Given that I met almost as many opinions as people, it was difficult to unpick them all and write about them with any sense of narrative. My solution was simply to provide accounts of many of my conversations, to show how one idea built on another in my own thinking, and then leave it to you, dear reader, to reach your own conclusions.

Behind all this travelling and thinking - was Everlasting. He has agreed I can put his picture on the cover of the ebook, and to use his name in the title. He is an extraordinary man, and it was a privilege to spend six weeks with him. And something pretty special happened for him, too - so he won't forget this trip either. So, more than anything else, this little ebook is a tribute to him.

Readers in the UK can find it here. And if anyone wants a copy to review, please let me know.
Posted by JO at 18:30 2 comments: