I know our teachers work hard, but here in Malawi it's beyond tough!

I made it down from the heights of the Nyika Plateau, to spent a few days on the northern shores of Lake Malawi. I began in Karonga, not far from the border with Tanzania. It's a bustling town, thriving on trade from the north. But - though it's the rainy season - the rivers are dry and fields parched. Maize is brown and wilting. The World Food Programme will need to step on or people will go hungry here.

Further south, around Nkhata Bay, there has been more rain and the maize is flourishing. As are the pineapples, mangoes, cassava, sweet potatoes, sugar cane ... over 80% of Malawis are dependent on the food they can grow for themselves. But there is rarely enough to share, and no structure (that I can see) to share bounty in one part of the country with famine in another.

I was also privileged to visit a secondary school for girls - precious here, as too few girls continue their education into their teens. I spoke with two teachers, comfortable with classes of fifty students, in low brick-built blocks scattered between the trees. There is a library (though a student told me it was not well-stocked), a domestic science room, a computer room (though no internet access), and a full curriculum - including agriculture.

Two students showed me their dormitories. (As secondary schools are few and far between, and populations scattered, boarding is essential for most). The blocks are divided into small sections (when I was working I saw bigger prison cells) each with two bunks and four small storage spaces for suitcases. Mosquito nets are provided - but too few are used as these little spaces get so very hot. Malaria, it seems, is just another African hazard. There is a block with showers, and outside sinks where girls wash their own clothes.

These girls are the lucky ones. Although in theory women have opportunities in Malawi, in reality almost all these girls will go back to their villages and marry. The head girl told me that when she leaves school she will help her mother to run her business - buying second hand clothes by the ton and selling them in the markets. So she will, at least, have her own money to spend. But university ...

However, I did have my picture taken with the teachers and three students - and they've agreed it can appear on the internet. They made me so very welcome. 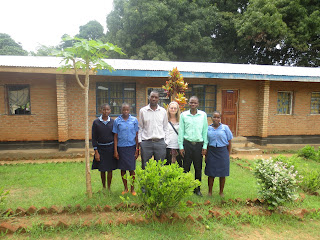 And, following that, I managed to visit a primary school, where a teacher was doing his best with a class of 130 five-year olds. Somehow he was still smiling.
Posted by JO at 02:07