Last week (scroll down if you missed it) I wrote about our minute’s silent reflection for those who lost their lives in the earthquake. Now to tell you a bit more about where I was.

Thulaswara is a small village, close to Chitepani (where Tika grew up). Their main school building collapsed in the earthquake and the Chitepani Trust (a small charity - more of that another time) had made a huge contribution towards the rebuilding. We (Tika and Ann - a friend who is also here at the moment, and me) went to the village to join the celebrations for the anniversary of the rebuilding. (Please bear with the brackets!)

We took a jeep up to the village. (I wasn’t sorry - I’ve walked up here many times, and it’s a long, hot, dusty climb.) The villagers were assembling as we arrived. Benches were set out in the school yard - children at the front, men behind them, and the women on separate benches at the side. I settled at the back. 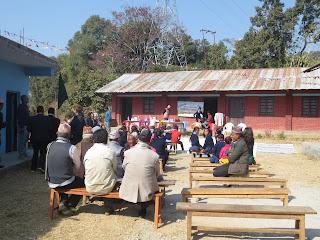 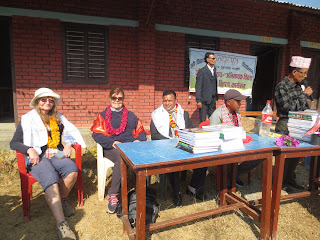 Then all other visitors to the village were given a comparable welcome and seats at the front - so it felt a bit less uncomfortable. But I still think my precedence over local people whose ties to this village are much stronger than mine does not sit easily with me.
Nevertheless, there I was, as the speeches began. To be fair, there were occasional breaks for children to march by with flags, or dance, or come to the front to receive prizes (writing books), and for those of us at the top table to pay our respects the education goddess. But these interludes were breaks in the main performance - speeches. Children shuffled on their benches and pulled faces at each other. People got up and went to the loo and slipped back into their seats.

I looked around. The sky was a deep blue, the buildings low and functional, the benches resting in the dust. Small birds twittered; kites took to the thermals. Prayer flags fluttered in the breeze. (This is the view from a nearby hilltop). 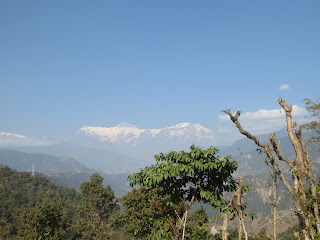 Yes, this went on longer than any prizegiving I had to sit through as a child. But when I was a child we had plenty to celebrate - school sports, school plays, school fetes. Here in the mountains people have barely enough to see them through the seasons. Every achievement is precious - and deserves its moment in the limelight. And if that means I have to sit through hours of speeches, and have no idea what on earth is going on, that is fine. It was an honour to share it with them.

I thought I understood the impact of an earthquake. My last visit here was three months after the devastating earthquake in 2015 - and I saw for myself the fields of tents in Kathmandu, where families had nothing but a flimsy tarpaulin between them and the monsoon. I saw the crumpled temples in Durbur Square, the sacred Boudnath held up by scaffolding. I met one of my guides, with a brave smile failing to hide his worries about the cracks that made his home uninhabitable for him and his young family. (Many of you will have contributed to help him rebuild it - more of that another time).

But last week, in the middle of celebrations in a school in Thulaswara, a small village in the hills north of Pokhara, I got the glimpse of how shallow my understanding had been. Even now I understand no more than a nanodrop.

For one minute we were asked to stand and remember those who died. There we stood, the might of the snow-capped Himalayas behind us and the sky a deep summer-blue, to remember. That’s where I saw it - etched on the lined faces of the old women, in the old man leaning on his stick, even the children stunned into silence as they remembered the events of that day. And their faces showed, not memories of buildings collapsed into dust and rubble - but fear.

The very ground beneath their feet is no longer reliable. In a few terrifying minutes they learned that the  foundation on which they build homes and schools and small farms and temples, on which they teach their children to walk, can rumble and heave and reduce their lives to nothing.

Yes, temples and homes still need to be rebuilt. But that feeling, that fear, was stamped on every face, that day, in the sweet January sunshine. And what I noticed, what I felt, is nothing compared with the feelings these brave people live with every day.
Posted by JO at 18:30 9 comments:

Email ThisBlogThis!Share to TwitterShare to FacebookShare to Pinterest
Labels: 2015 earthquake., after the earthquake, Nepal, travel

A welcome in Kathmandu

The plan, in coming to Nepal, was to spend some quiet time recuperating from the events of last year. Maybe I should know better than to think life here could be quiet. So much has happened in this first week I can’t condense it into one post, and so I’ll give you snippets, and then more snippets when I get home.

The airport in Kathmandu no longer alarms me. To be fair, the airport itself has never alarmed me, and the computerised visa system now makes the arrivals process significantly easier and quicker. No, it is the landing, in the mountains, which had been a bit breath-holding. One minute you think you are several hundred feet above the ground and then, a quick circle with mountains crowding on all sides, and you’re down. (It’s still alarming if it’s windy!)

But I hadn’t expected all the Nepalis on the plane to stand up and put coats on. I’ve been here in January before, and know it can be chilly in the evening, but this time it was actually cold. Not England-cold, not the raw, bone-eating cold of home, but still cold. And cold enough for poor people without warm clothes to die in Nepal this winter. So, I tell myself, put your fleece back on and stop grumbling.

Besides, after the usual preliminaries at the hotel I was invited to join the group of young men cooking potatoes on a fire in the courtyard. We sat close enough to get hot knees. The flames fizzed and crackled, smoke wafted into the night sky, and the potatoes were delicious. Welcome, I thought, to Nepal.

I had just one full day in Kathmandu. I wandered out in the morning, armed with a map and the sun in the south. So how did I get so lost, so often? Yet each time I ended up on a street corner, clearly bewildered, someone took my trusty map and relocated me. Each time I’d set off again, with confidence, only to get lost again. (Once a lad was sent to run after me, as I’d taken the wrong turning within half a minute of leaving the man who had sorted me out!).

I’m rarely fazed by being lost. And it matters not one jot in Kathmandu - the streets are teeming with people and motorbikes and cars, small shops spill their wares onto the pavements, the air is so thick with diesel you can taste it, icons at the roadside exude wafts of incense, there are potholes and storm drains and the occasional dog - but the Nepalese are unfailingly kind and generous. If I had to choose one city in the world to get lost in, it would be Kathmandu!
Posted by JO at 18:30 12 comments:

By the time I get to Kathmandu ...

By the time I get to Kathmandu you’ll be having your Tuesday lunch ... yes, it’s that time of year again.

I’m packing. As a process it doesn’t faze me - I just gather everything I need and tuck it into my suitcase. (What? No rucksack? Sadly my knees have, finally, rebelled at being asked to carry a quarter of my body weight on my back. And so I’ve found a lovely wheelie suitcase with plenty of pockets and I am beginning to forgive it for not being a rucksack.)

But packing is so much more than just shoving things into a suitcase. It comes with that tingly feeling that precedes every trip. Even returning to somewhere I know and love, like Nepal, it is impossible to predict what might happen.

Last time I visited just after the earthquake. There was devastation everywhere, but almost no tourists. How much has been rebuilt? Have the tourists returned? What has been built to lure them? I know that Pokhara now boasts the longest zip line in the world (a drop of 600m over 1.8km) ... shall I?

Last time I had too close an encounter with a crocodile. The time before that it was a tiger. Is it time to settle by the riverside and steer clear of the wildlife?

Last time Tika’s children were aged 6 and 14. Is the little boy too big for balloons now?

I know I need some recuperative time after the challenges of last year. And I know the country well enough to be sure I can find some restful places. I also know that it is full of the unexpected - and  to go with too many plans means I miss the opportunities that might leap out at me (metaphorically - I don’t need leaping tigers!)

These are the sort of mumblings that accompany my packing. It is a glorious dialogue between the familiarity of last-minute preparations and possibilities that lie ahead.

Enjoy your Tuesday lunch. While I unpack in Kathmandu.
Posted by JO at 18:30 12 comments: