There was another air crash in Nepal last week. Nineteen people died - it seems that the plane took off from the domestic airport in Kathmandu, developed some sort of problem, turned round and burst into flames when the pilot tried to land on the river bank.

There have been at least six crashes of domestic planes in the last two years in Nepal. (I have heard a claim that there have been over twenty - but I can't verify that. It seems too high a figure to me, even for Nepal.) I'm not going to get into the whys and wherefores of this crash - there may or may not be an enquiry in Nepal and it's not for me to second guess what the outcome of that might be.

However, as those who have read Hidden Tiger know, it might take a while to get an Inquiry off the ground. Meanwhile, planes will continue to fly. Tourists will have to weigh the risks of using them, or resorting to buses - surely the more sensible option? Except that roads in the mountains can be, er, interesting. Tarmac clings to the mountainside - if you are lucky. Often it is washed away in the monsoon. Tata lorries give the surface such a pounding that too soon it is broken up into boulders and potholes. Travelling any distance can involve a night bus - do you need details of night buses? It is like travelling in a coffin. Except if you were in a real coffin you'd be dead and never need the toilet ... Or you can use taxis, which is expensive but at least you feel in a bit more control (except when the taxi breaks down ...)

All of which makes any plan to visit Nepal look like a very silly idea. Yet I want to go back. Because I have friends there now. Because the mountains are spectacular. Because the temples continue to mystify me. Because water buffalo wander through the lake at Pokhara. Because I've got the hang of strikes and power cuts, and love those corners where resources are limited and there is only the kindness of strangers. Because there are tigers.

And Nepal needs tourists. Manufacturing is rudimentary; they need to import food and services from India - they have nothing to sell but their scenery. If Nepal is ever to sort its education and health challenges it must attract international income.

So - is the risk of travelling there, by road or in the air, worth the benefits of seeing this wonderful country? Here is a picture, just to show you want you might be missing if you decide not to go. It was taken at Lumbini - the birthplace of Buddha, a site filled with temples from all over the world. Some are quiet and mystical. Others are such fun - like this! 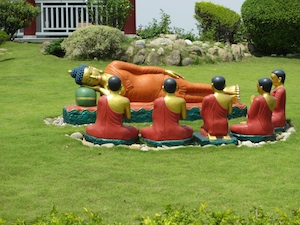