Me and my lodger

As some of you know, I have a lodger. And, while I’m not one to just by appearances, this is what she looks like (she’s a collared dove): 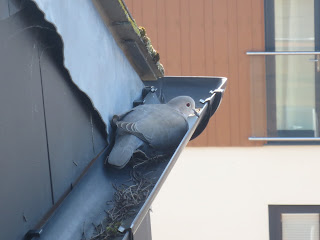 This gutter is at my eye-line when I stand on my balcony. I can watch her from my sitting room. When she first moved in she seemed very aware if I moved around - her little head bobbed up and her eyes seemed more alert. But now she takes very little notice - and I don’t get closer than about eight feet.
And she’s not alone: 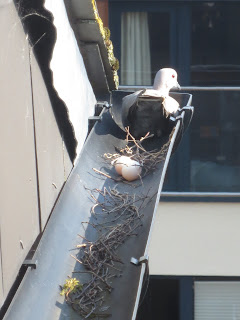 As you can see, this is not the best-constructed nest. Not much more than a haphazard collection of twigs. And I watch as the male arrives with a long twig to add to the collection. There is much grateful head-bobbing as he hands it over. And off he goes.

Leaving her with a twig far to long for her to even turn it round easily so it can sit on top of the others. She shuffles, tries bashing on the wall beside her to break it up, and eventually bits of if fall off. If she had words, she’d be muttering to herself: ‘Bloody bird. Can’t even manage to find a twig the right length. Might has well have gone to IKEA and come home with the box, not opened it to find out which bits were missing ...’

And when he brought her another, she waited until he had flown away and dropped it over the side!

She doesn’t have words, of course. And I’ve watched Springwatch often enough to know that the chances of her clutch surviving is less than fifty per cent. She’s already down to one egg: one has rolled off the end of her gutter onto one below. 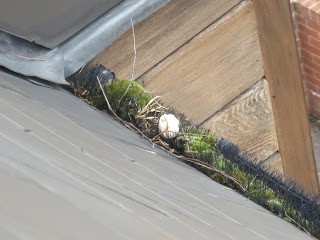 But that doesn’t stop me feeling fiercely protective of this little family. I can spend hours watching her, rearranging twigs, shifting on her nest and then poking beneath her chest to make sure the remaining egg is snug beneath her. So if I’m late posting blogs over the nest week or few, I’m probably on bird-duty!
Posted by JO at 18:00