And then there was Egg

So, after all the anticipation, all that’s left is a few twigs and one egg. It was hard, that moment when the birds flew off.

I was lucky, in a way, that I was watching. I’d glanced across and noticed there was no bird on the nest - but that happened from time to time, for a minute or few, so I wasn’t particularly worried. 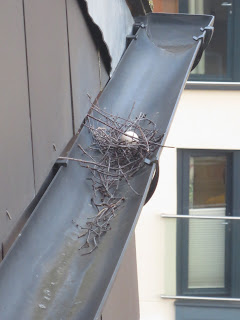 But then both birds returned together. They perched beside their little egg and did a lot of head-cocking and bobbing, cooed a lot, and then flew off towards the distant hills. I’ve seen one of them since, come back just to check on the egg once or twice, but within hours it was clear that this nest has been abandoned.

Who knows why? There are a thousand reasons why this egg didn’t hatch - and it’s far from uncommon. Collared doves (I now know) lay just a couple of eggs but have several clutches through the year. Unlike birds that lay many more eggs, they are quick to fly off and try again rather than persist with an egg that hangs around a bit. What this couple haven’t done is relay eggs in this nest.

Which is sensible. For this nest is in full sun for much of the day - and so has been fryingly hot over the past couple of weeks. The bird on the nest has sat with her beak open and a wobble in her throat, presumably the equivalent of a dog panting to keep itself cool. A chick exposed to that sun would risk serious dehydration. And when it rained, there was no protection at all.

I was saddened, of course. After the delight of the nest being built in the first place, I settled into life with Bird and looked forward to a chick. But I also knew that it was a stupid place for a bird to raise a brood.

And so I wish them well with a second clutch, wherever it is.

And I need to clear this gutter (not, of course, on my own - that would involve dangling over my balcony) - and, regrettably, put some sort of spiky thing in the balcony to deter any other birds nesting here.
Posted by JO at 18:00