Where's this Malawi book, then?

Where's this book about Malawi, then? After all, I've been back since the middle of February, and I've not said one word about it. Surely I've got some idea where it's going by now?

To be fair, no one has actually said that to my face. But there has been a hint or two, and so far I've managed to deflect them. However, I can't do that forever, so here is what is going on.

Firstly, I was ill when I came back. I've not written about being ill before, and I'm not going to start now. Suffice it to say that stringing a complete sentence together was an achievement for a few days, and it's taken a while to get back to 'normal' (whatever that means).

Secondly, plans are in place for me to move house. This has been on the agenda for a while, and now the wheels are in motion. It's something else I'm not going to write about - anyone who has moved house knows how brain-consuming it is, but that doesn't mean that anyone else is seriously interested in your dealings with agents or solicitors or your plans for new curtains. To be honest, I bore myself sometimes, thinking about it all. But it's the context in which I'm trying to have a life, so I've just got to run with it.

And then there's Malawi. I can, at the moment, find brief chunks of times to think about it - an essential preamble to trying to unpick the story of my trip. For there is a story - there are several stories - and I shall find a way to knit them together in some sort of coherent narrative. But give me time - it's not a straightforward country to think about and I need to do it justice.

In the meantime, I'll give you a picture, just to be going on with. I only know what animal this comes from because the guide told me - I wonder if anyone can guess? 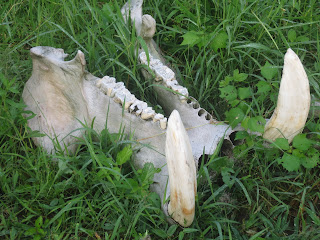