Local elections ... will you vote?

It's not long till the local elections. Yawn. I can only speak for myself, but I find it hard to be interested in who will sit in the town hall and spend hours discussing the whys and wherefores of the public toilets in the supermarket car park. Just fix the wretched things and move on.

But ... would I do it? No. I couldn't face the hours wrangling over toilets, or parking, or whether the shed on Ms B's allotment breaks planning regulations. But just because I'd rather chew my arm off than get embroiled in all this doesn't mean that it isn't important. After all, I pay my Council Tax and these people have to make decisions about how it is spent. They have to decide whether the potholes in the road the outside the school are more important than toilets. Whether to cut a few buses to small villages all week or all buses on Sundays. Whether a meagre charity grant should go to the children's playground or a Christmas lunch for the elderly.

So I shall vote. Which means, under the new system, it's up to me to make sure I'm registered. 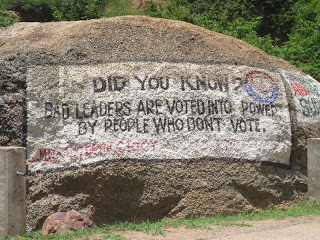 (In case it's not clear, it reads: DID YOU KNOW: BAD LEADERS ADE VOTED INTO POWER BY PEOPLE WHO DON'T VOTE)

I saw this on a rock by the roadside in Malawi - where there are no newspapers outside the major towns, and very few people have television. Which means that the only way to disseminate information in rural areas is word of mouth, notices on trees - or paintings on rocks, like this.

But surely it's a message that must resonate across the world. For if we don't vote, then we silence our own voices. And we risk being governed by tossers. Those people on the council, spending hours on the toilets (so to speak) - they are, finally, answerable to me and to you and to all of those who made sure we were registered and made it to the polling stations. Let's make sure, at least, that we elect decent people.