Just one story from Nepal, to show why tourism matters so much.

I was wandering along Lakeside, in Pokhara, birds a-twitter in the holy trees and Om Mani Padme Hum drifting from one of the small stores that line the street.

A man called out, 'Hello, where are you from?' It is a familiar cry. I turned to wave, saw he was wearing the baggy green of the Australian cricket team and than was enough to lure me into a conversation.

He rents bikes to tourists. His bikes - sturdy mountain bikes with polished metalwork and healthy tyres - were lined up by the side of the road. He hoped I'd hire a bike.

'Then maybe I can take you around on my motorbike?' His voice is higher now, and I can hear his desperation. I explain that I am meeting Tika in half an hour.

His face falls. 'I used to have a proper shop,' he explains. 'But with no tourists, I cannot afford the rent. So now I am at the side of the road.'

He has no shelter from the rain, nor scorching sun. And can only try to grab the attention of the few tourists who pass his way and hope that one of them - one would be a start - will hire one of his bikes. Then he can take just a little money home to his family.

It's a story repeated over and over and over. It's why the devastation of tourism has been at least as traumatic as as the earthquake.

And here is a picture, of Annapurna South, taken at about seven in the morning. This is the sort of view you can wake up to. 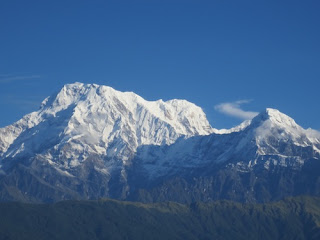