Ipoh and the caves

It is eight years since I was last on Malaysia. On that occasion I took a bus from Cameron Highland to Penang, and we stopped for what seemed like an age at some traffic lights beside one of Ipoh's caves.

That was enough to make me stay go back there for a few days, to find out more.

The city itself is only 200 years old, and so these temples relatively recent. But huge caves stretching deep into limestone hills was evidently a temptation to the temple-builders. There are four main temples, but countless more lurking in the hillsides.

Some are truly vast: 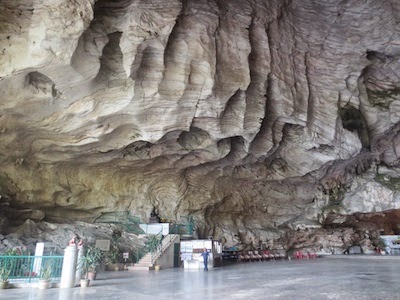 If you look closely there is a tiny woman towards the bottom of this picture - and no, she's not an Umpa Lumpa, she's a full-sized woman in an enormous cave. 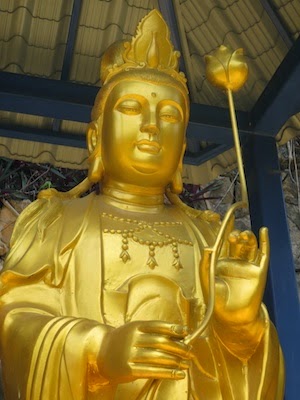 And here is a huge Buddha that does not justice do the size of the cave - I failed in my efforts to get a clear picture of gods in the semi-darkness that show how how even the biggest images are dwarfed in these caverns. 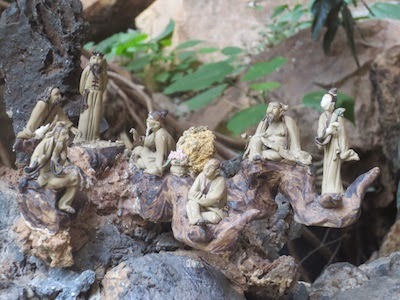 In contrast, this Chinese gods, perched on a rock, are only about 40cm tall. They look to me like they are having a party while all the serious religious stuff is going on elsewhere. 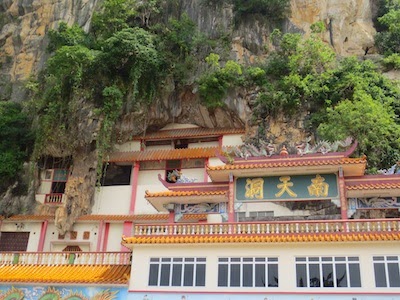 In contrast, this temple is built into a cave with a front wall and open entrance and windows. Steps lead up to smaller temples - complete with monkeys - and views across and industrialised quarter of Ipoh. I decided not to take a picture of that. 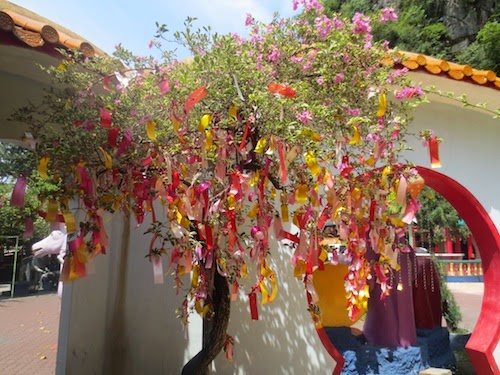 Is what excited me most of all. It is in the grounds of one of the temples, lurking in a corner like an apology. It is a wishing tree. All those colourful tags are strips of fabric that anyone can write on with a wish for someone else. So it's no asking the gods for money here. Instead you stop and think about those you love - who may be close at hand or far away - and quietly wish them well. 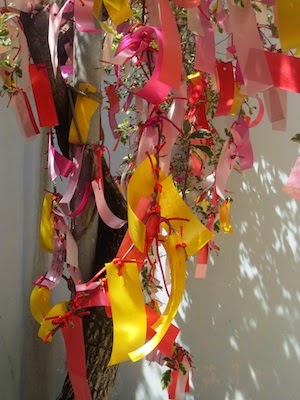 No, I'm not going to tell you what I wished for. But my little yellow tag is still fluttering away, on its tree. Well - I'm sure you'd have written one too, if you'd been there.
Posted by JO at 19:30