Now I really will tell you about the cobra

Beng Melea is seventy kilometres away from the main sites at Angkor Wat. I went in a tuk tuk. For those who've never met a tuk tuk, it's like a motor bike with little carriage on the back. It has a plastic roof, and decorative tassels to make it pretty, but nothing to protect the passenger from wind, or dust, or even determined rain.

After seventy miles my face looked like Cher's - pinned back, and with a complete coating of dust. I recovered with a soft drink, and then took the wide path towards the temple, past the board which told me which parts of the site to avoid as it is still littered with land mines, past the group of disabled musicians (the way most land mine victims make a living), past the monks, and towards the huge main gate.

A man approached from the right, determined to be my guide. I tried, politely, to tell him I was happy on my own, but he was undeterred. Oh well, it's only a tip he needs. So I followed him into the temple ...

... to find that it has not been excavated. There is a polite boardwalk for tour groups, but nothing to stop anyone crawling through doorways, or clambering over rocks, to explore the place for themselves. My guide leapt over a large crack in a pathway, held his hand out to help me over, and we were off - through pitch-black hallways, over fallen trees, along precipices.

He even took a photograph, to prove I was there: 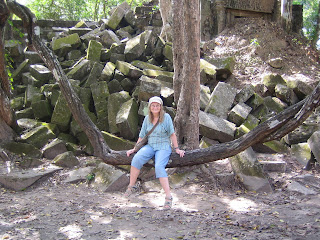 Once he had his tip, I did it all over again - well, wouldn't you? It was like playing Indiana Jones - though there were times when I looked at a narrow ledge and reminded myself that just because I was allowed to climb all over this doesn't mean I have to. But it was such fun, like finding the place for myself, for the very first time. Do you recall that feeling, as a child, that you really could do this dangerous thing by yourself - climb up that cliff, or swim a whole length, or walk in the river and feel water round your knees? Well, it was like that, all rolled into one.

This shows you the boardwalk, and the sort of things I was climbing over: 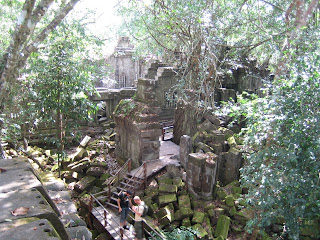 And this the sight that greeted me when I peered across the top of a wall: 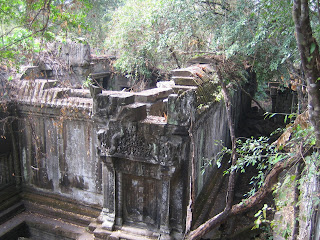 I was crawling through here: 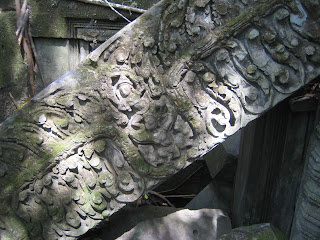 when I saw a passing guide talking with his group. He was muttering about the history of the place, and how it was discovered in the 1960s, and plans to excavate and clear the land mines.

And then: 'A cobra lives under there,' he said, pointing to the rock beneath my knees. 'But it only comes out at night.'

(Note to daughters. This was much less dangerous than the tiger. The tiger was awake!)
Posted by JO at 20:00