Cambodia is much more than Angkor Wat

Most tourists fly into Siem Reap, spend a couple of days traipsing round temples of Angkor Wat at the end of which they've seen barely a fraction of what's there, and fly out again to the beaches of Vietnam or the temples of Thailand.

They miss the rest of the country - and they miss meeting some of the bravest, most resourceful people I have ever known. They have had the worst thing happen to them - a third of their population was massacred by the Khmer Rouge. Now they must rebuild their country, beginning with absolutely nothing. And they're doing it - with courage, and humour, and extraordinary generosity.

I have folders and folders of photos, and finding just a few to show you has been almost impossible. But I've found a few, to give you a flavour of how some people live: 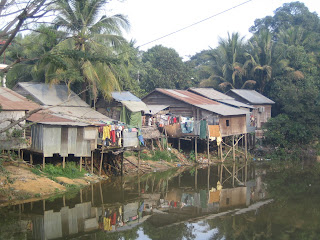 These homes on stilts are common all over south-eat Asia. They look flimsy, but keep nasties on the ground and well away from people when they are sleeping, and flood water can run away beneath them when the monsoons come. They also provide shade on the hottest days.

I have no idea what this woman is cooking, but she was having such fun doing it: 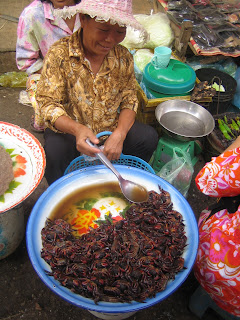 Here are children sorting chillies (spare a thought for them, next time you have a curry): 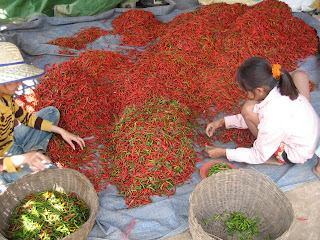 But it's not all work: 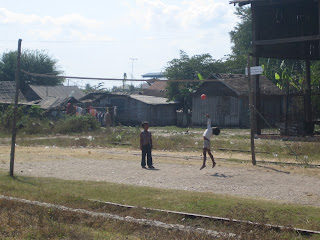 There are beaches, and temples, and jungle. The Tonle Sap - the huge lake that covers much of the middle of the country - is stunning beautiful. Rice grows on the flood plain - a sweet green that fills the paddy fields. There are markets - only one or two with trinkets for tourists, for these are markets for local people, with sacks of spices and heaps of rice,

And when the day is done, you can always sit and contemplate the Mekong: 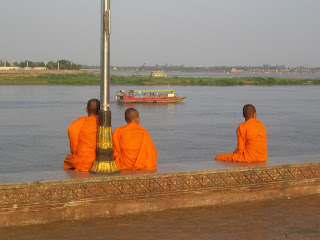