When the earth moves

Where do I start? Last time I blogged I'd just crept out of the jungle. I've done so much since then that feels a long time ago!

I spent a couple of days in Quito, and then went to Cotopaxi - a volcano which erupted last year, so no one can climb it at the moment. But I plodded up its neighbour, as high as 4000m (it's a bit thin on oxygen up there, I don't think I could have gone any higher), and spent the night in an ancient hacienda that so was full of extraordinary, ancient stuff the I felt like a bit of an artefact myself after a couple of hours.

From there to Banos, which is in the valley at the foot of a live volcano. This volcano: 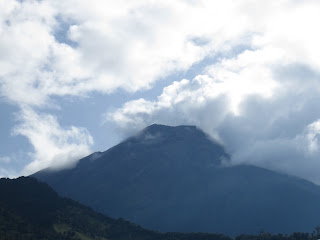 I'm afraid that's the best I can do as far as pictures go. I had to trudge up a road a long way to find a vantage point, and and was very lucky the summit wasn't covered in cloud. You thought that was cloud on the top? No, that's steam ... and my resort was on a ridge, about 100 metres below this.

Who, in their right minds, builds a resort on the side of a volcano? Or a whole town at the foot of it? But in the past, when this volcano erupted, ash and lava flowed down the other side. There are established trees here, buildings decades old. There are emergency routes everywhere, 'just in case', but sometimes you just have to chance it - because all this volcanic activity means there are wonderful thermal spas to flop about in (and bridges to bungee jump off, for the truly intrepid).

If you wanted to stay out of reach of any seismic activity in Ecuador's mountains, you'd never build anywhere. If it's not volcanoes, it's tremors. The road from Banos to Cuenca (where I am now) could be one of the great road trips of the world - seven hours through the Andes and some of the most stunning scenery I've ever seen. And it's a good road, most of the way, except where tremors have caused cracks and potholes. It's hard to keep the show on the road when the earth keeps moving.

So there you have it, from jungle to volcanos to thermal spas and earthquakes. And it's wonderful!