I can hear you sighing already. I'm not going on about Nepal again, am I - well yes, I am.

From some of the news coverage you might assume that everyone in Nepal is sitting about waiting for rescue. And indeed there are thousands - probably tens of thousands or more - in huge need. They are traumatised by the loss of homes, of family members, of everything they had dreamed of for their futures.

And then there are those who still have homes, who aren't waiting for the government or aid agencies, who are buying up what food and water and supplies they can, packing it into trucks and sending it as far into the mountains as they can.

Those of you who have read Over the Hill or Hidden Tiger will know of Tika. He was my guide in Nepal and North India. Whenever I think of him I smile - for his giggles saw me through some alarming times. When a man with a gun in Lucknow patted the ground and invited me to sit beside him and I lied and lied and lied about a husband waiting in the hotel for me, Tika was convulsed with laughter beside me. When I had spent hours in a taxi coming down the Siddhartha Highway after a cyclone, he was beside himself.

He was in Kathmandu when the earthquake struck. Within a day or two he had made it home to Pokhara, and had begun to organise relief efforts. He helped to mobilise anyone fit enough to help. Food, blankets, medicines - trucks were loaded and dispatched. While waiting for their return they continued to gather goods from local people.

Friends of mine can see a picture or two on Facebook here - scroll down and you'll find more about what he's been up to.

And for those who can't do that, here's a picture showing a fraction of the goodies he's gathered, to send up to Gorkha: 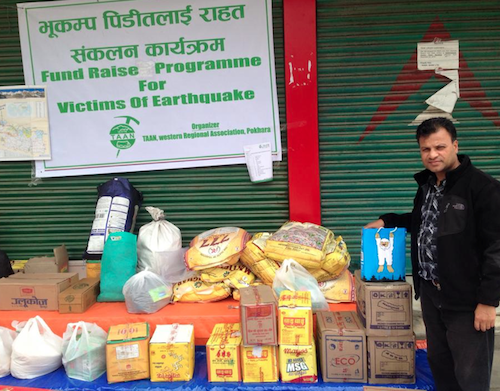 This is a glimpse of things the Nepalis are doing for themselves. It's not enough, of course. The rest, surely, is up to the rest of us.
Posted by JO at 19:30