I promised you Cuba pictures.

It will take time to get my Cuban stories into some sort of order, but here - as promised - are a few of my photos. 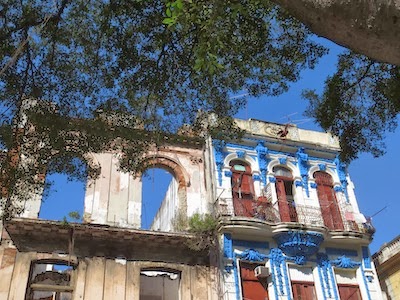 I've begun with this picture from Havana, as it typifies much of Cuba. This is taken in one of the main streets, and shows how some of the lovely old buildings have been restored while those next door are left to fall down. The extent of the restoration is impressive - there are some beautiful plazas, especially in the oldest part of the city. But - and this is a huge BUT - the restoration is concentrated in areas where the tourists go. Much of residential Havana is crumbling. 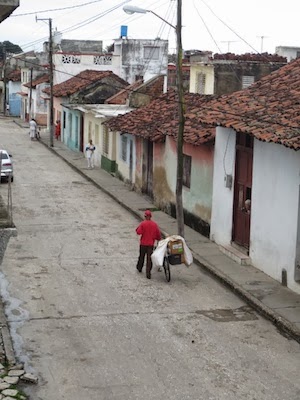 I took this from my bedroom window in Sancti Spiritus, at about six in the morning. This man walked up and down the streets, calling loudly enough to wake the cockerels. He had bread and biscuits in the box on the back of his bike. It is now possible for someone to set up a small business in Cuba. Maybe he was up all night, baking. Yet I never saw anyone come out to buy. I hope he was more successful round the corner. 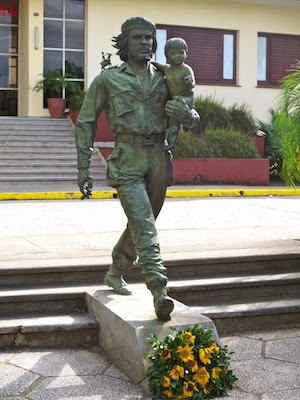 There are images of Che Guevara all over Cuba. His image is on the walls of bus stations, private homes, on the bank notes. I shall, in time, write about him - but for now here is a statue of him holding a child. Whatever you think of him, I liked this - it's small, and hidden between hedges like an apology. But I've no idea what that stag with the gremlin on its back is doing on his shoulder. 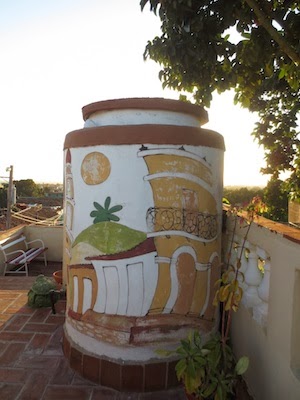 Cuban art is wonderful - and everywhere. This is the painted water tank, on the rooftop of a home I stayed in. Imagine - going to all that trouble just to paint a water tank! I sat on that rooftop to read, and to write, with pigs snuffling in the yard next door and the sun going down over the sea. 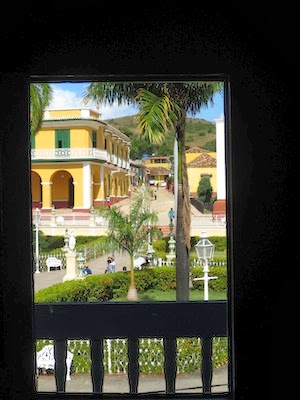 This is a square in Trinidad (the town) taken through a window. It is as immaculate as it looks here - beautifully painted with trimmed bushes in the plaza and palm trees giving a little shade. If I'd been able to take a picture a little to the right of this, you would be able to see the steps where I spent hours listening to the music. There are less manicured corners in Trinidad - but a curious tourist has to step outside the normal thoroughfares to find them. 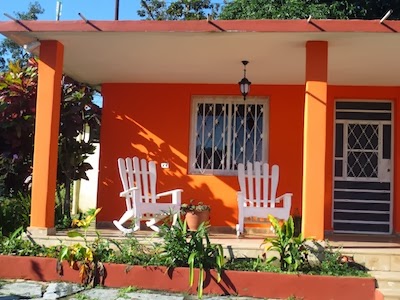 Finally, this is the front porch of my casa particular (like a Homestay) in Viñales. The only thing missing is me - on one of those rocking chairs. I had some serious rain while I was there - what a shame, there was nothing I could do but sit and read. Well, what would you have done?
Posted by JO at 20:00