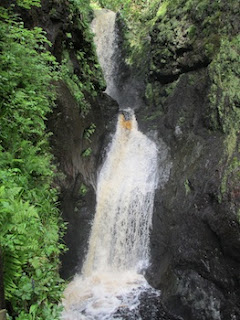 I'm home from a wettish week in Northern Ireland. I wish I didn't have to begin by commenting on the weather - but I can't help being a bit British about this, having a quick moan, mentioning a flood or two and gales that buffeted my little car.

There, having got that out of the way, I'll tell you about some of the lovely places I went to. This is the waterfall at Glengariff - raging after all the rain (oops, hadn't meant to slip in another weather reference), in a little glen than smelled of wet ferns and garlic. 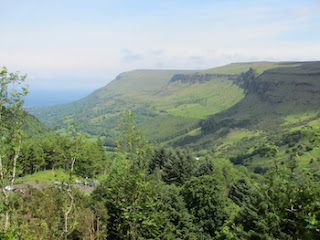 I clambered on up through the soggy trees, and finally emerged to this view - across the top of the glen and down to the sea. For company: skylarks and a few sheep.

Did I get lost? Of course I did. But not hopelessly lost - I came down on the right side of the valley, and knew roughly how to get back to the start. Though, unlike many occasions when I've been lost, I didn't meet an unlikely characters to weave into a story. 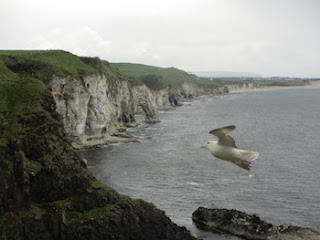 This picture is taken at Dunluce Castle. I was trying to capture the cliffs, which looked magnificent and threatening under those grey skies. And the seagull (I must be truthful here) flew across as I pressed the shutter. So this picture is a wonderful accident. 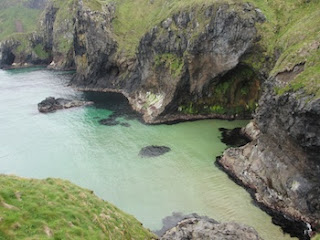 I took this from a rope bridge - so I was swinging about in the wind at the time. But the sea was clear and playing with cliffs. The gulls cried, wind ruffled the grasses and all was right with the world.

Sorry, no pictures of guinness (though I drank plenty). Nor the Giant's Causeway - which is as impressive as all the photos suggest but you know what that looks like. I just wanted to give you a taster of Antrim's beauty.